“Go Eight” - we would scream at the top of our lungs when Jon took the base as number 8 on the Gamers Blue youth baseball team. This USSSA Major 10U (10-year-old and under) team played 60-plus games this season, not losing a single one in the league and won seven championships out of ten tournaments. 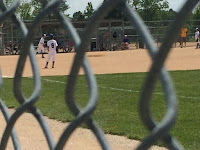 We usually sat on a stepped-up bench, behind the diamond-shaped field surrounded by metal fence. The occasional foul balls were bounced off the fence or flew over then dropped into the crowds while many yelled “heads-up!!”


But mostly we’d yell and scream to cheer up Jon and his teammates, no matter the situation.


When batting:
When pitching:
To spectators, the cheering seems symbolic or even superficial. And that was what I felt first. But as the season ground on and the boys learned how to bat, pitch, field, catch and coming home like after a mud bath; and more importantly, as they learned how to deal with adversity and failure, we parents also acclimated into the cyclical rhythm of the sports and the cheering became our own experience of participating in the game.

In a July evening, Gamers 10U had its last league game in Kirkwood Athletic Association park. The night was long as there were two games to play, the weather was steamy and the mosquito was brutal. However, all the parents were cheering excitedly, wholeheartedly, and faithfully.

And we were having great fun!
Posted by Frank Lee at 4:23 PM