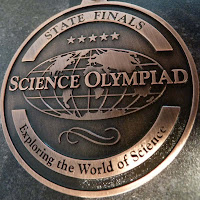 Tiffany likes sciences and is a member of the Lindbergh Highschool Science Olympiad team. Today (2012.04.14), her team spent a full-day competing at the Missouri Science Olympiad State Tournament held at the campus of Mizzou. They took a school bus ride to and from Columbia, Missouri. I drove to Lindbergh about 9pm to pick up Tiffany. The members of the team seemed exhausted yet happy.
The Lindbergh team qualified for the state after finishing the third in the regional tournament (Missouri Region 6) at Lindenwood University on 2012.02.04. (school news)
The three events they competed in are:
For the State Tournament, Lindbergh High placed the 8th in team event. Tiffany won the third place in individual round for "Disease Detective", and also placed third in all individual events at the Regional Tournament.

Science Olympiad
Recognized as a model program by the National Governors Association Center for Best Practices in the 2007 report, Innovation America: Building a Science, Technology, Engineering and Math Agenda, Science Olympiad is committed to increasing global competitiveness for the next generation of scientists.
Missouri State Science Olympiad is a non-profit organization that operates under the National Science Olympiad which is a national non-profit organization dedicated to improving the quality of K-12 science education, increasing male, female and minority interest in science, creating a technologically literate workforce and providing recognition for outstanding achievement by both students and teachers.  These goals are achieved by participating in Science Olympiad tournaments and non-competitive events, incorporating Science Olympiad into classroom curriculum and attending teacher training institutes.
For over 25 years, Science Olympiad has led a revolution in science education.  In the face of shrinking college enrollment in science majors, falling science test scores and a nationwide shortage of K-12 science teachers, Science Olympiad continues to challenge, inspire and inform the academic and professional careers of students and instructors across America.
Science Olympiad Competition
Each team is allowed to bring 15 students who may participate in a variety of events in their skill set.  Practices vary from monthly meetings to weekly study sessions to daily work as tournaments near.  Science Olympiad competitions are like academic track meets, consisting of a series of 23 team events in each division.  Every year, a portion of the events are rotated to reflect the ever changing nature of genetics, earth science, chemistry, anatomy, physics, geology, astronomy, mechanical engineering and technology.
Emphasis is placed on active, hands-on, group participation.  Through the Olympiad, students, teachers, coaches, principals, business leaders and parents bond together a work toward a shared goal.  Teamwork is a required skill in most scientific careers today, and Science Olympiad encourages group learning by designing events that forge alliances.
The prestige of winning a medal at a Science Olympiad tournament, whether regional, state, or national,  is often a springboard to success.
Links:
Updates:
Posted by Frank Lee at 8:07 PM