Catching Up With Jonathan 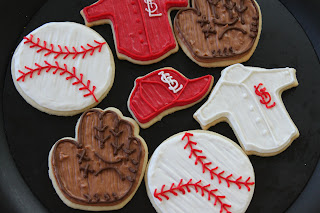 Before going to sleep last night, I read to Jonathan a few pages of a book he has been reading. Then we chatted and he told me about his recent dream.
In the dream, Jonathan was playing a baseball game as pitcher. He grabbed two balls and put them on a desk while watching others play. Somehow these two balls felt strange to him, as they were soft outside but hard inside. Just before he was about to throw the pitch, the balls disappeared from the desk, and the dream ended with him not being able to throw the ball.
This is probably one of those dream-never-come-true situation about things one desired but couldn’t get to.  However, in that very moment, instead of dismissing it, I felt a deep empathy for the 8-year-old boy and his desire to try and accomplish something.

Inspired by Cardinal's World Championship last year and the hometown hero David Freese, Jonathan has been watching a lot of Cardinal baseball lately, including a series 2 game 3 victory over Cubs on Sunday, so playing baseball has been quite keen on his mind, just as he's now going through semi-professional tennis camps and training.
So, I said to Jonathan that I would take him to a Cardinal game this year.  He then asked: “but how can I catch a ball without the glove?”. He meant if there is a flying ball coming his way, he needs to be prepared. Great, now we will get ready for a game and to catch a ball!
I’m glad that I spent time talking with Jonathan and catching up with his world, which is fast moving beyond Pokeman into the real world of sports - tennis and baseball. I hope I can be there every step of the way, even I’m writing this post 500 miles away in Rochester, MN.